What exactly is Independence Day?  Do we even know any more?  Reluctantly, I sat down at my computer and made a feeble attempt to put some thoughts together on the relevance of Independence Day, then and now.

As I expressed to my followers on the Strategic Living Facebook page, I have gone underground for a few months, isolating myself from society and COVID-19 while at the same time absorbing the news of the day and trying to make sense of it.

The reality is that as prepared as I was and am with physical products and life-skills, I was not at all mentally prepared for the discourse of 2020:  the impeachment hearings, global pandemic, death of George Floyd, and unmitigated riots and anarchy.  To say that I am in a funk is, to put it mildly.

When I finally shared this publicly, I heard a collective sigh of relief from others who were either afraid to speak up, or lacking a safe platform in which to do so.

So here we are today, on Independence Day in the United States.  This year it is a day without celebrations, picnics, BBQs, and fireworks. Many of us are self-isolating for fear of getting sick ourselves or infecting others.  Some are afraid to leave their homes lest they get car-jacked or their home is invaded while they are out.  Fear rules the day.

I don’t know about you, but this aging prepper and her husband are frustrated and depressed.  We don’t know what to believe and which expert to listen to.  Freedoms that we have long considered our right as citizens appear anything but.  And sadly, we realize that this may be the last year ever that July 4th will be recognized as the day the Continental Congress formally adopted the Declaration of Independence.

Knowing that this may be the last time we can publicly glorify our independence, I would like to reflect on the unique experiment we call the United States of America.

END_OF_DOCUMENT_TOKEN_TO_BE_REPLACED

In late January, life, as we know it today, was quite different.  We were free to come and go as we please, to get a haircut, dine at a local pub, and mingle with our friends.  The news of the day was mostly about politics and as disgusting as that can be at times, it was what it was.  Or was it?

More and more I became enmeshed and outraged by the news of the day and the bias of the mainstream media.  This was nothing new since my disdain for the MSM actually began over ten years ago and was part of the catalyst for becoming a prepper and starting my first website, Backdoor Survival.  But what was happening now was worse – a lot worse.  What was being passed to the unenlightened was opinion disguised as news.  It was disgusting.

As much as I dislike the term “Fake News”, indeed, that is what I was hearing and reading.  Hypocrisy was the rule rather than the exception and I was mad.  Do you remember that line from the movie Network?  “I’m as mad as hell, and I’m not going to take this anymore!”  That is how I felt.

In order to vent, I reached out to my pal George Ure (Urban Survival) to vent a bit.  As some of you know, George spent part of his career as a broadcast journalist and was the news director for a top Seattle radio station.  He was both well respected and well connected in the industry and was nothing if not 100% credible.

What follows is an interview I did with George before COVID-19 dominated the news.  I have sat on it for a few months thinking that in the big picture of things, perhaps it was no longer relevant.  Of course, I was wrong.  Questioning the ethics of journalism now, more than ever, is important.  As our liberty is being challenged and our right to free speech suppressed, what George has to say is timely.

Life as we know it has indeed changed and may never return.  Corrupt politicians and their partners, the lame-stream media, are accelerating changes I thought I would never see in my lifetime.

Enjoy (if you can) my interview with George and let me know what you think.

END_OF_DOCUMENT_TOKEN_TO_BE_REPLACED

I don’t remember exactly when I embraced DIY other than to recall that I used vinegar and water as a household cleaner when I was a mostly-broke college student.  Over the years, I became interested in natural homemade products and experimented not only with simple household cleaners, but also personal products such as cleansers, salves, and home remedies.

More recently I have turned to soap making and you might say the rest is history.

While teaching myself to make soap, I discovered  Jan Berry and her blog, The Nerdy Farm Wife.  I purchased a couple of her books and was hooked.  When I learned that her book of homemade products was being updated and expanded, I knew I just had to have it.

This wonderful book is suitable for every kitchen chemist and in this article, I will tell you why.  I am also going to share the recipe for a Calendula Spice and Honey Scrub that I have made myself and, in my usual style, offer a copy of the book in a giveaway.  NOTE:  The giveaway has ended.

END_OF_DOCUMENT_TOKEN_TO_BE_REPLACED

I get my CBD from ORGANICA NATURALS.

Get two bottles of 2500/ 3500 CBD oils for the price of one.  Offer also applies to 6000mg Softgel capsules.
For all other items, use the discount code HEALTHASSIST77 to get 40% off your purchase.
CLICK HERE FOR DETAILS
~~~~~ 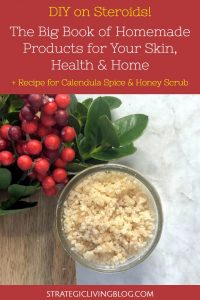